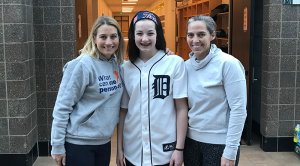 Thus at that moment the brave little soul was born into the world, and through his suffering and God’s strength he unlocked the goodness and love in people’s hearts. – The Brave Little Soul, John Alessi

Thirteen-year-old Emma May has always been a driven go-getter. As a kindergartener, she boldly called up her grandfather, Richard Genthe, to ask for a $1,000 contribution for a school raffle.

“She didn’t hesitate at all,” recalled her mom, Emily, smiling. “She got her donation, hung up, and proudly marked it on her sheet.”

Now in eighth grade, Emma’s strong spirit has continued to be a part of everything she does. She is a fierce competitor in swimming, her career goal is to become an extreme meteorologist (because standing in hurricanes “looks like fun”), and she is told all the time that she has a gift for lifting people up.

“I have always wanted to do something that helps other people,” she said.

Emma channeled that desire into “Emma’s Swim Universal for ChadTough,” a swim-a-thon, sponsored by Goldfish Swim School, that has raised more than $5,000 for The ChadTough Foundation.

As she did in kindergarten, Emma made the phone calls to line up sponsors, which included Goldfish Swim School, Genthe Automotive, Weingartz, Underground Printing Company, Tortoise and Hare Running and Fitness Center, and Starbucks.

“If she had a question, I’d guide her in the right direction,” said Emily, “but she made every phone call herself.”

Emma’s parents, Kevin and Emily May, learned of Chad’s diagnosis in 2015 through family friends. Two months later, they ran into the Carr family at Universal Studios when they were on Chad’s Make-A-Wish trip.

“That is why it’s called Emma’s Swim Universal for ChadTough,” said Emily. “That was the first time we met them, and we just slowly got more and more engaged in the story and want to help out in any way we can.”

Emily is a fourth-generation in her family business, Genthe Automotive, which has been a big supporter of The ChadTough Foundation.

“We’ve been sponsors for the past two years at the MVP level,” she said. “Attending the Gala has been a great time, and we’re doing that again this year.

“My parents (Richard and Kathy Genthe) are doing Dancing with the Michigan Stars this year, so that will be awesome to go see that.”

“What Can One Person Do?”

The idea for Emma’s Swim Universal for ChadTough was born after she had an interest in volunteering for RunTough for ChadTough, which her younger sister, Maddie, and mom, Emily, participated in.

At 13, Emma wasn’t old enough to volunteer, so she chose instead to create her own event.

“She’s definitely a go-getter,” said Emily, “100-percent independently driven. She wanted to do something and thought of the swim-a-thon idea. She’s an amazing daughter, and we’re very blessed to have her.”

Emma secured the Saline High School pool as a location, arranged for custom swim caps and t-shirts to be created and donated, made her own marketing materials, and registered participants through a Google Doc she created.

When asked why she did all of this for ChadTough, Emma – the oldest of four with many cousins – didn’t hesitate.

“I love kids,” she said, “and I don’t like the fact that kids can get cancer and die from it. I want all kids to be able to live from any kind of cancer.”

For Jason and Tammi Carr, Emma is the perfect example of “what one person can do” to make a difference – a phrase that has become a tagline for The ChadTough Foundation.

“What an impressive young lady,” said Tammi Carr on Instagram. “Emma is helping Chad to change the world!”

Having fun at Emma’s swim universal for ChadTough! What an impressive young lady @eatmaybubbles is! She organized this swimathon to benefit ChadTough all on her own. The perfect example of “what can one person do”. Emma is helping us to change the world! #chadtough @goldfishswimschool

A post shared by ChadTough Foundation (@chadtoughfoundation) on Feb 2, 2019 at 11:00am PST