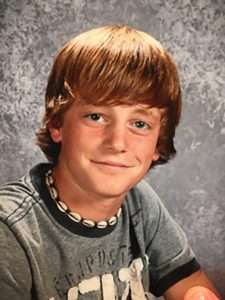 In Loving Memory of Bryce Mamo

Bryce’s parents, Annette and Denis, always described him as “a very caring, active and inquisitive child.” Sitting around watching TV? No, thank you. Instead, Bryce loved to push his family, neighbours and friends to do projects like wash their cars, clean out the garage, cut the grass, garden, shovel – all because he wanted to help. He was like that with his dad, too. Bryce would often push his dad’s hands out of the way so that he could use his own hands and learn as they went along.

Bryce loved so many things swimming, skateboarding, camping, fishing, dirt biking, art, having people over, holidays, travelling, spending time with family and friends, and so much more. But what Bryce loved most was hockey. He skated like the wind! Even when playing was no longer an option, he’d ask to wear his hockey skates and hold his skateboard.

“Bryce loved his sister, Bailey. He included her in everything. They were 2.5 years apart, and did everything together,” Annette remembers. “Her first words after he died were, ‘I’m not a sister anymore.’” Bailey misses him quietly – and struggles with his loss – every single day.

The Mamo family wants others to know Bryce’s story because, “Bryce was one of only 6 children in Ontario [with DIPG] when he was diagnosed in 2009, at 13. We were told that he had ‘more or less than a year’ to survive.” The prediction was right. He lived for 361 days.

This cancer is so rare, and yet the treatment for it has not changed in over 30 years – radiation, and that’s it. Surgery was too risky due to the tumor’s location, and chemotherapy wasn’t offered as it’s ineffective and has low success rates. Radiation only slows the growth. It doesn’t eliminate the tumor. When it comes to DIPG, there are no other options.

“This needs to change – more research, more therapies that prove effective are needed,” expressed the Mamo family. “These children are not surviving this kind of cancer, and that’s unacceptable. These are our babies. Help is needed to do something good for DIPG families who have to go through this with their babies, too.”

Written by the Mamo family