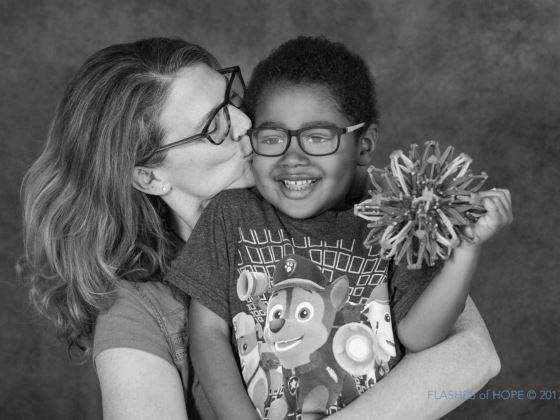 When Lisa Taylor adopted her son, Charlie, shortly after he was born, she was ready to embark on a lifelong adventure of joy and happiness. “Being a single parent never felt overwhelming because of what an awesome kid Charlie was,” said Lisa, emphasizing what a “sweet, kind, silly little boy he was. Being his mom was such a joy!”

It wasn’t until Charlie turned 4 that Lisa would face an unimaginable horror. In May of 2017, Charlie was diagnosed with DIPG, the worst kind of pediatric brain cancer.

Lisa knew immediately that the diagnosis was dire, but she decided to fight with everything she had to help her sweet, wonderful, smart little boy. They immediately began treatment at Michigan Medicine, trying every option available to them at the time. Doctors performed a biopsy on Charlie’s tumor in order to do genetic sequencing. This procedure allows doctors to learn more about the specifics of the tumor and how best to treat it.

Within a month, Charlie began a six-week radiation treatment plan in Ann Arbor. The mother and son duo had to leave the house by 6:45am, five days a week, to make the drive in from Toledo, OH.

While Lisa felt the doctors who treated Charlie were wonderful, she was overwhelmed with the gravity of the situation. With the diagnosis came weighty decisions that she alone carried as a single mom.

“…my dear friends have described me as a warrior, but I am thinking of a lot of other words lately that aren’t quite as strong… (worrier, crier, etc.),” wrote Lisa that summer as she journaled her experience as a way to keep family and friends in the loop.

She wondered whether combining holistic treatments with Western medicine might improve Charlie’s outcome, so she decided to try both. She was desperate to try anything to save her only child.

By October, Charlie started developing severe necrosis (swelling of the brain that can sometimes result from radiation). As a way to reduce the symptoms, Charlie was on and off steroids, which resulted in other complications. Those months were the hardest, as Lisa felt a rollercoaster of emotions ranging from immense sorrow for what her child was going through to deep gratitude to her friends and family who showed them immeasurable support.

In February, the MRI showed that the tumor (which had shrunk with radiation) had now grown back. “I’ve never felt so scared, helpless, and sad on this 10-month journey as I do right now. This is just a person/parent’s worst nightmare, and I can’t understand why it is happening to my sweet Charlie (or why it would happen to any child!),” wrote Lisa in a journal entry after learning the results of the MRI.

Charlie’s health continued to decline, and on May 5, 2018, he gained his angel wings. “I am so heartbroken and a bit in shock as I tried to hold on to hope until the very end. He was the bravest boy this past year, and I am just so mad and sad about this awful disease,” journaled Lisa. “He was the greatest thing to ever happen to me. We had so many wonderful things yet to do together.”

Lisa’s support system helped get her through those dark days, and she was overwhelmed with love as people from all over the world gathered for Charlie’s services, wearing his favorite color – yellow.

Shortly after Charlie passed, Lisa heard a podcast about The Kindness Rocks Project. The idea is to paint a rock with an inspirational message, then leave it for someone who needs it to find. The project has spread around the world, making these rocks a treasure to find. The week of what would have been Charlie’s 6th birthday, Lisa held a rock-painting party at her house as a way to spread inspiration in honor of Charlie. “It was such a wonderful way to help get me through a very difficult anniversary,” said Lisa.

When I called Lisa to get her permission to tell Charlie’s story, she was on her way to the Kindness Rocks Garden in Toledo, which she established in honor of her sweet little boy. “I don’t ever want to stop talking about Charlie – he will always be such a huge part of me.” Charlie was a warrior, and we will continue to spread awareness of this terrible disease he so bravely fought.

By Jen DeGregorio, Director of Communications, The ChadTough Foundation