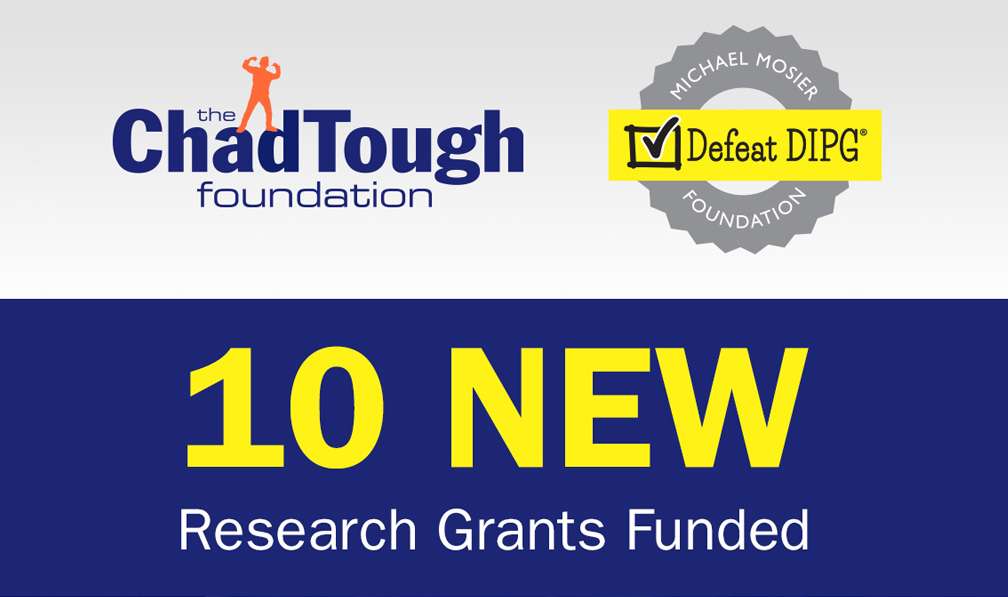 The ChadTough Foundation and Michael Mosier Defeat DIPG Foundation are funding ten new Diffuse Intrinsic Pontine Glioma (DIPG)-specific research projects totaling more than $2.8 million over the next three years (2020-22). Two of the new grants will be made in partnership with SoSo Strong Pediatric Brain Tumor Foundation.

To date, the ChadTough Defeat DIPG grant program has committed $6.1 million to 23 DIPG research projects. In addition, ChadTough and Defeat DIPG have committed $600,000 to help fund an innovative collaboration between PNOC (Pacific Pediatric Neuro-Oncology Consortium) and the DIPG Centre of Expertise in Zurich, supporting preclinical and clinical work across multiple institutions.

“By working together, we are amplifying our capacity to make significant investments in DIPG-specific research,” says Defeat DIPG Executive Director Jenny Mosier. “It is the generosity, passion, and commitment of the Defeat DIPG and ChadTough supporter networks that propel our shared mission of finding a cure for this devastating disease.”

Jason Carr, President of The ChadTough Foundation, explains, “Our grant program is designed to push the field forward by investing in research that is likely to fuel progress and add to our understanding of this disease, while also ensuring we empower the next generation of researchers to bring this over the finish line for our children. We hope for a cure in the near term, but we realize we need a pipeline of researchers who have the expertise and drive to follow through with this work as long as needed”

All projects for the ChadTough Defeat DIPG grant program are reviewed by the Defeat DIPG Scientific Advisory Council, an unparalleled group of experts in pediatric brain cancer who evaluate each application for scientific merit. “Our Scientific Advisory Council brings a breadth of experience and expertise that sets our grant program apart,” says Mark Mosier, Chair of the Defeat DIPG Board of Directors. “Their rigorous review of the many applications we receive ensures we are using donor funds as efficiently and effectively as possible.”

The ChadTough Defeat DIPG grant program was structured with guidance from the Defeat DIPG Scientific Advisory Council to ensure the grant amount, duration, and criteria were shaped to achieve the most meaningful results to push the field forward. All of the Defeat DIPG ChadTough grants are multi-year grants, allowing researchers to spend more of their time in the lab and less seeking additional funding for future years. Researchers submit progress reports to ensure the studies are proceeding as anticipated.

ChadTough and Defeat DIPG bring together 11 families with children who have fought or are fighting DIPG that are actively raising research dollars.

“We are grateful for the opportunity to work together with this incredible set of families who contribute so much,” says Tammi Carr, Co-Founder and Board Member of The ChadTough Foundation, “They have all been through such a difficult experience with their own child’s battle, yet they harness their grief and passion to make a difference for families who will face DIPG in the future.”

SoSo Strong Pediatric Brain Tumor Foundation is a nonprofit established in honor of Sophia Ann Myers and is co-funding two of the ten grants awarded in this grant cycle.