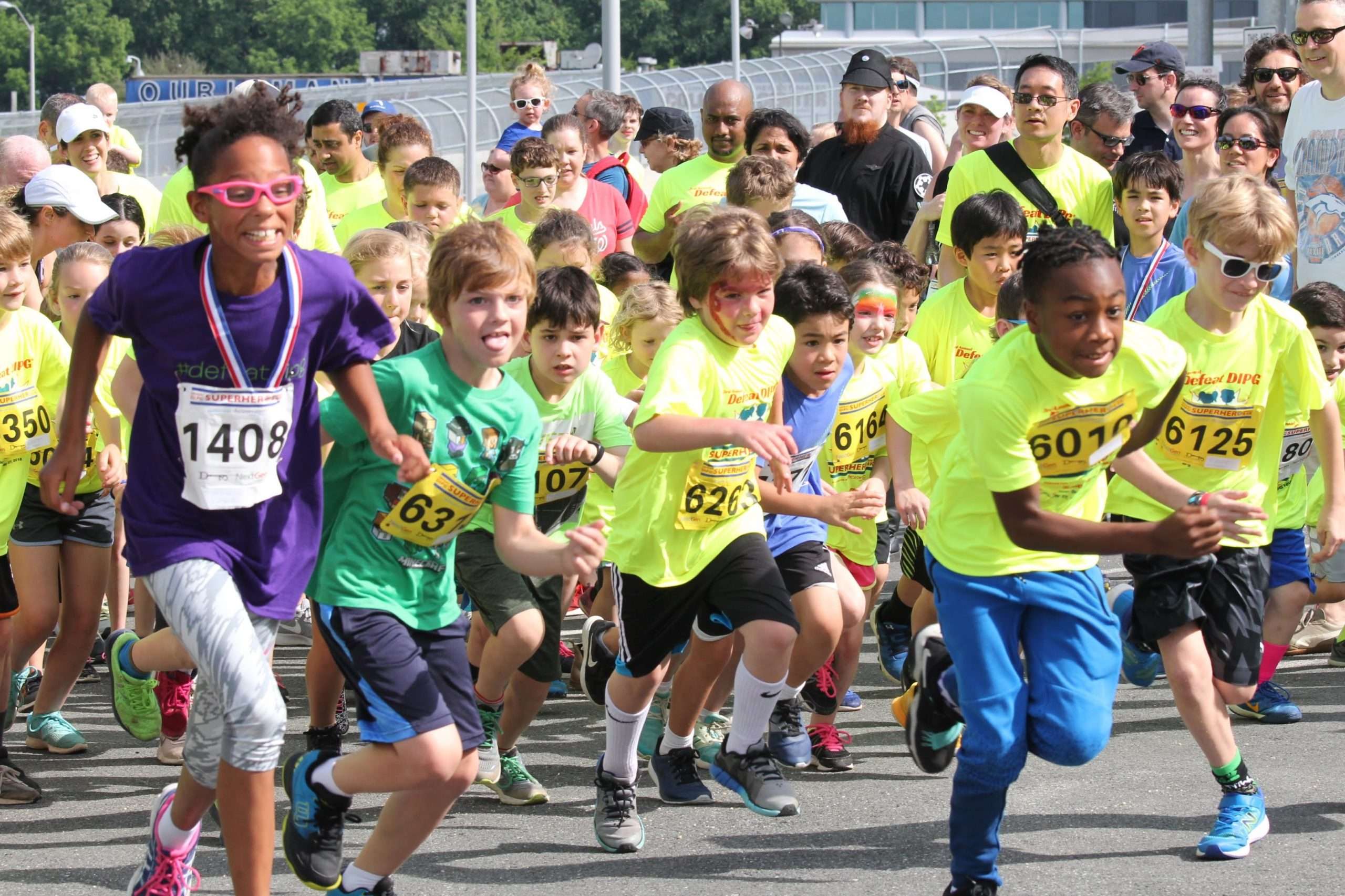 As The ChadTough Foundation and Michael Mosier Defeat DIPG Foundation unite to become the ChadTough Defeat DIPG Foundation, we are excited to present an expanded events calendar that includes the longest-running events for each foundation: Superhero 6K and RunTough 5K. These two races, Superhero 6K in May (Brain Cancer Awareness Month) and RunTough in September (Childhood Cancer Awareness Month), have together already raised over $2 million for DIPG research!

Registration is now open for the 6th annual Superhero Sprint & 6K! Early bird pricing will be available for virtual runners with shirts through Monday, March 8, 2021.

The ChadTough Defeat DIPG Superhero Sprint & 6K, presented by Headfirst Summer Camps, will kick off on Saturday, May 15, 2021. The event is a fun and meaningful way to contribute to the fight against childhood brain tumors. This year the event is virtual, which means anyone from anywhere can participate on their own by doing a walk, run, or activity of their choice anytime from May 15 through May 31.

This year is a particularly special one for this race, which was established in honor of Michael Mosier. We are celebrating the 6th year of the Superhero 6K in a month that marks 6 years since Michael lost his life to DIPG at the age of 6.

Before Michael was diagnosed with brain cancer in September 2014, he was an energetic, active little boy with a passion for playing any and every sport. A week after his first day of kindergarten, Michael suddenly began complaining of double vision, and his right eye stopped moving and blinking normally. An MRI uncovered the tragic news that Michael had a fatal tumor in his brainstem. A biopsy confirmed that the tumor was DIPG.

For Michael, the tumor quickly and harshly began to take away his loss of motor function. Less than two months later, he was in a wheelchair and was never able to walk independently again.

“We were devastated to watch the joy Michael derived from sports go away, as the disease stole so much from him so suddenly. His left (and dominant) side grew weaker and weaker until it was essentially paralyzed. We rushed to fill his time with any fun substitute we could,” said Michael’s mom, ChadTough Defeat DIPG Foundation Co-Founder Jenny Mosier. One of the very last things the Mosiers did as a family was to form a team for Race for Hope, a brain tumor race in Washington, D.C. Michael was in charge of naming his team and designing shirts for the run. He chose the name Team Big Hero Michael and brought together a team of 300 friends and family, who all wore yellow shirts and capes. Leading up to race day, Michael generated donations from all 50 states in just two days. After that, his story spread rapidly around the world, and he gained donations from more than 60 countries. Michael was honored as the top fundraiser for the whole race, raising more than $100,000 for pediatric brain cancer research.

Jenny and Mark Mosier established Michael Mosier Defeat DIPG Foundation in June 2015. When it was time to host their first major fundraising event, they knew they wanted to honor their son with a race of their own.

“As a tribute to Michael, we decided to carry through the superhero theme,” said Michael’s dad, Mark Mosier, Director of Research and Co-Founder of ChadTough Defeat DIPG Foundation. “The main event is a 6K because 6 is the median age kids are diagnosed with DIPG, and the age when Michael was diagnosed and died.”

In the past five years, the Defeat DIPG Superhero Sprint & 6K has grown from its first year with 800 participants to over 2,500 registrants in 2020. Dozens of families impacted by childhood brain cancer have participated in the event in honor of their children. This year, the event is expected to hit the $1 million mark in total dollars raised. Proceeds from this event are used to fund pediatric brain cancer research, with an emphasis on DIPG.

When Michael Mosier Defeat DIPG Foundation united with The ChadTough Foundation in January of this year to form the ChadTough Defeat DIPG Foundation, Tammi and Jason Carr were excited to add the Superhero 6K to their list of fundraising events. Much like RunTough, which honors their son Chad Carr who died of DIPG the same year as Michael, the race allows families facing similar challenges to come together and make a positive impact by raising funds for brain tumor research.

“Events like RunTough and the Superhero 6K have made a major impact on raising awareness for the desperate need of more funding and research for pediatric brain cancer,” said Tammi Carr. “These events allow people from around the world to get involved in any level of capacity and show their support for our mission and dedication to finding a cure.”

To learn more about how to participate in the ChadTough Defeat DIPG Superhero Sprint & 6K, visit www.Superhero6K.com.