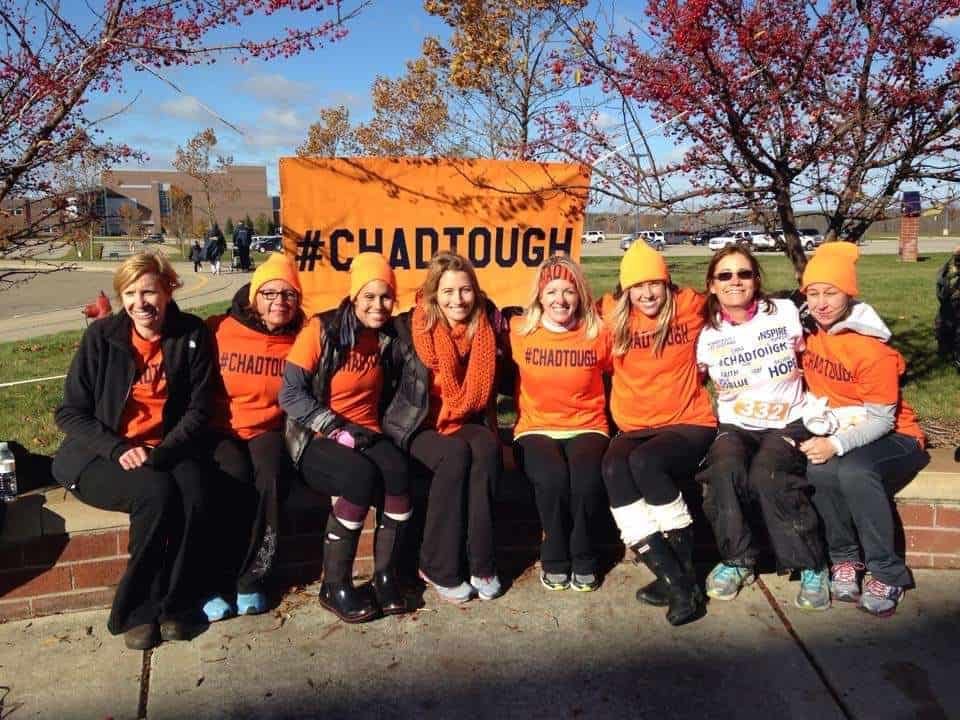 We all have experienced that one pivotal moment that changed us forever. For Mandy Tousa, that moment came 8 years ago with a phone call. It was the end of September in 2014. A new school year had started, days were getting shorter, and mornings began to show signs of the coolness that would inevitably come. But on that day, among the chaos of running a household, Mandy’s world came screeching to a halt. She learned that 4-year-old Chad Carr, the son of one of her dearest friends, had been diagnosed with a type of terminal brain cancer called DIPG (diffuse intrinsic pontine glioma). It was estimated that Chad had just 9 months to live. Mandy’s family had become close friends with the Carrs when they moved into their tight-knit neighborhood in Saline. Mandy and Tammi Carr hit it off immediately, and Mandy’s son Cooper and Chad became inseparable. How would Mandy explain to her youngest child that his best friend was sick and would likely not make it a year?

Knowing her friend’s fighting spirit, Mandy knew Tammi would do anything at all in her power to save Chad. Mandy decided, in that moment, that she would walk alongside her friend every step of the battle.

Mandy watched helplessly as the Carrs searched for any treatment options available. As medical expenses began to pile up, Mandy had an idea. What if other community members rallied together for a neighborhood fun run to raise awareness and show their support? She wasn’t sure what would happen, but she felt a desperate need to do something to help and got to work organizing a run that would take place on November 1, 2014, just weeks after Chad’s diagnosis.

Mandy quickly learned she wasn’t alone in her wish to help. Word of the event spread quickly, and on that cold, autumn day nearly 500 people took part in the run to show their support.

“I was just so completely touched by our community,” said Mandy. “People are connecting and showing that something good is going to come from this terrible situation.” Mandy had no idea at the time, but the event she organized, RunTough, would be the catalyst to what would become the ChadTough Defeat DIPG Foundation — one of the nation’s leading funders for pediatric brain cancer research.

Chad’s battle with DIPG lasted 14 months, but his legacy has inspired thousands of people to get involved in the fight against pediatric brain cancer.

“After the community rallied together to show us their support, I realized we could do even more to raise awareness for this awful disease,” said Tammi. “If there would have been more awareness and more research 20 years ago, Chad would likely still be here today. Now, through the ChadTough Defeat DIPG Foundation, we’re determined to give future families who face DIPG the hope we didn’t have.”

The foundation has now funded more than $20 million dollars of DIPG research across 31 institutions around the globe. And it all started with RunTough. Now in its ninth year, the annual RunTough for ChadTough Defeat DIPG has grown into a 5K and 1M Fun Run. The event will take place on Saturday, October 1, at Saline High School’s Hornet Stadium or virtually from anywhere in the world. While the event began in honor of Chad, who would be turning 12 years old on September 26, it has now grown to include dozens of families honoring their own children who have had to face a pediatric brain cancer diagnosis. To date, RunTough has raised more than $2 million for pediatric brain cancer research. Today, Mandy is still in awe of the support that resulted from one idea and an amazing community. She continues to play a major role in organizing RunTough and as a realtor for Howard Hannah is an event sponsor. She and her family, including Chad’s best friend, Cooper, can be seen every year racing across the finish line, remembering the little boy that inspired so many.