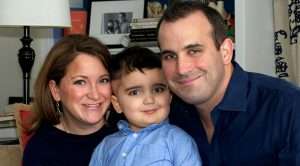 Courage for Cures Announces a Partnership with The ChadTough Foundation

The Boivin and Carr families are joining together to raise funds for DIPG research.

Brad and Nettie Boivin have dissolved their foundation, Courage for Cures, to begin directing all funds to The ChadTough Foundation. The Boivin family founded Courage for Cures in 2011 to honor their son, Julian, who passed away on July 3, 2011 after a seven-month fight with Diffuse Intrinsic Pontine Glioma (DIPG).

“Team Julian/Courage for Cures has been going strong for eight years,” said Nettie Boivin. “We’ve been partners in our shared mission with ChadTough since 2015. We’re all working toward the same goal, we’re only 45 minutes away from each other, and we’re funding many of the same projects, especially at Michigan Medicine.

“The Carr Family and The ChadTough Foundation have been so generous and thoughtful in honoring Julian within their events, it just made sense to officially join forces and fold our efforts into their larger organization and broader reach.”

ChadTough DIPG Partner Families are parents and siblings of children who have fought DIPG that would like to direct fundraising efforts to research through The ChadTough Foundation.

“This is a way for families to honor their children by raising funds and awareness for DIPG research without having to run their own foundation, which is a lot of work,” said Tammi Carr, Co-Founder of The ChadTough Foundation.

“The Boivins recognized the opportunity to let go of administrative work by dissolving their foundation and, instead, focus completely on raising money to go to research through ChadTough. We are excited to have them and their incredible network of supporters!”

Since forming in 2011, Courage for Cures has raised more than $1 million for DIPG research, reaching that milestone in 2018. The foundation has funded more than 50 research grants, including the St. Jude – Washington University Pediatric Cancer Genome Project (2011) that identified the H3 mutations specific to DIPG.

“That was the first big project we helped fund,” said Nettie. “Julian’s name is on the statue commemorating the groundbreaking research outside St. Jude, the hospital that treated him.”

Julian Boivin was diagnosed with DIPG on November 29, 2010 when he was just four years old. Courage for Cures was founded as a way to raise money for DIPG research, baring a superhero “J” logo to recognize Julian’s love of superheroes.

“Courage for Cures will cease to exist in name, but not in mission,” said Nettie. “The changes in operations are administrative only. We’ll maintain Team Julian’s website and social media, and our supporters can still honor Julian and fund critical research by donating to Team Julian for ChadTough.”

The Boivins are looking forward to honoring Julian in new ways as a ChadTough DIPG Partner Family — they will participate in Dancing with the Michigan Stars in March — and contributing to the overall ChadTough effort.

“We are all working toward the same goal — to eradicate DIPG,” said Jason Carr, President and Co-Founder of The ChadTough Foundation. “Having the Boivins and their support system as a part of ChadTough only strengths our ability to do so. We’re looking forward to doing great things together to honor our boys.”