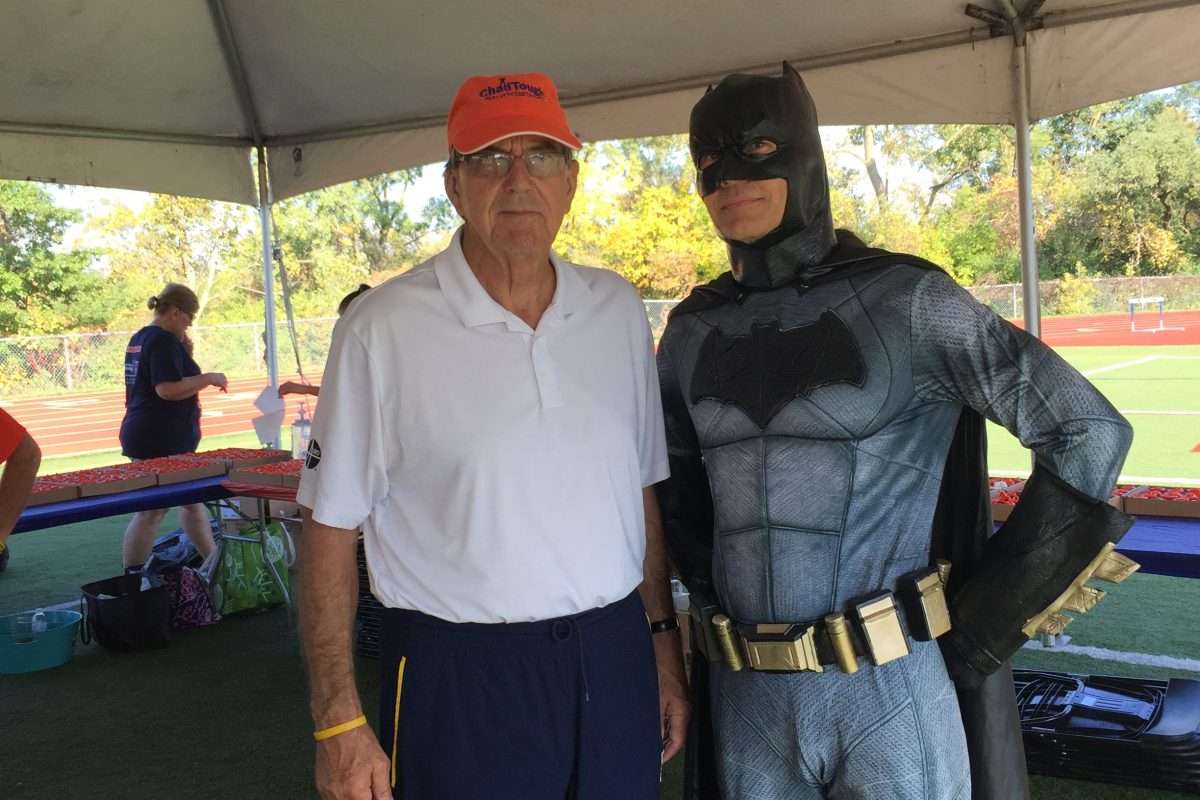 For the past few years a caped crusader has been seen at RunTough for ChadTough and other events. No, it’s not Bruce Wayne under the mask, but a doctor from a local children’s hospital. We call him Dr. Batman.

Originally from the Toledo area, Dr. Joseph Hornyak moved to Ann Arbor in 2001. He is a doctor at C.S. Mott Children’s Hospital, where he specializes in pediatric rehabilitation. He works with kids who have chronic disabilities such as muscular dystrophies and cerebral palsy, kids who have been in car accidents, and, of course, kids who have severe rehabilitative needs after cancer.

For as long as Dr. Batman can remember, comics brought him joy. “I’m a huge superhero geek. I have close to 30 long boxes that hold 500 comics each. I’ve been collecting them since I was a kid,” he says. He also frequently around strides the hospital in scrubs that feature a superhero, and his name tag has the Batman symbol on it.

He made his Batman debut at RunTough in 2017 on a blistering 90-degree day. “I showed up planning to run, and parked near the end of the subdivision. A police officer saw me and gave me a ride to the front because of how hot it was. He put his sirens on and everything, saying he was honored to drive Batman!” he says. He expected everyone to be dressed up in costume — but he was the only one.

Instead of running that day, he walked around talking with kids, taking pictures, cheering people on, and giving them high fives. In other words, he was bringing much needed joy, especially to children fighting the disease and to parents, family, and friends who were there supporting these children.

He even took his costume to Las Vegas one year and participated in the virtual RunTough experience.

Dr. Batman sees kids with a variety of cancers and brain tumors, all of which can cause impairments. Even when the day comes that there is a cure for DIPG and other brain tumors, he knows there may still be neurological injuries or impairments that can span a lifetime and that he can help with in a variety of ways, both as a provider and through raising the spirits of struggling kids and families.

Whether as his real self or as Dr. Batman, we at ChadTough appreciate all that he does. After all, not all heroes wear capes. But sometimes they do.