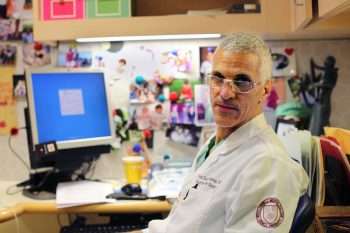 Perhaps the most difficult challenge in treating the most deadly kind of cancer in kids, DIPG, is the inability to safely deliver drugs directly into the brain tumor. This is due to something called the blood-brain barrier (BBB), a wall of cells that are there to protect toxins from entering the blood in the brain. So, while chemotherapy can be very successful in treating other cancers, the BBB blocks most of the drug from getting into brain tumors, presenting a major limitation in treating the disease.

Dr. Mark Souweidane is working to overcome this problem by focusing on a method called convection-enhanced delivery (CED). Through his clinical trial, conducted in partnership with Memorial Sloan-Kettering Cancer Center, Dr. Souweidane is experimenting with this local delivery method, as well as various combination drugs, to get higher doses of medicine safely and directly into the tumor itself without going through the bloodstream.

This summer, the ChadTough Defeat DIPG Foundation announced it will help fund Dr. Souweidane’s latest research on a project titled, Development of a Comprehensive Direct Drug Delivery Platform for the Treatment of Diffuse Midline Glioma. The foundation’s Game Changer grant will provide $600,000 of funding over the next 3 years to support this exciting new work.

The objective of the project is to develop more effective drug delivery methods for DIPG/DMG patients. To accomplish this, Dr. Souweidane will test various drug combinations and drug delivery techniques to more effectively target DIPG/DMG tumors, while avoiding the toxicities associated with the conventional administration of drug therapies. This is the first-ever comprehensive study of a wide range of alternative drug delivery mechanisms to determine the ideal approach for effectively bypassing the BBB.

“I am honored and grateful that the ChadTough Defeat DIPG Foundation is supporting this work,” said Dr. Souweidane. “My team and I expect the establishment of this drug delivery platform to act as an incubator for the translation of many cutting-edge therapies to early-stage clinical trials in the fight against DIPG.”

A Detroit native who attended the University of Michigan as an undergrad and Wayne State University for medical school, Dr. Souweidane has described finding a cure for DIPG as his “holy grail.” He was recruited by Weill Cornell Medicine in 1995 and has since gained national recognition for his devotion to treating kids with brain stem gliomas.

“I’m trying to cure a brain tumor called DIPG that currently kills 100 percent of the children who have it,” said Dr. Souweidane. “I didn’t get into neurosurgery to watch kids die. I chose this job to heal people. And DIPG has been decades of watching kids die. But if I can find a cure, so much of that pain will be paid back in a single instant. And on that day, I will feel like there has been some justice.” 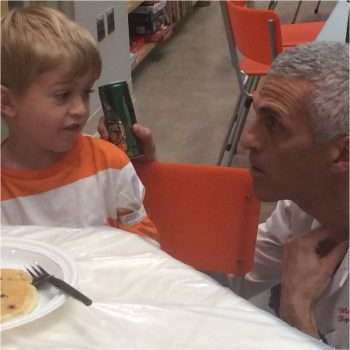 Chad Carr was one of the children who took part in Dr. Souweidane’s clinical trial in early 2015. Chad passed away later that year, but Dr. Souweidane’s work made a huge impression on the Carr family as they made it their mission to continue to fight for a cure for DIPG. Even in light of losing their son, they saw the potential Dr. Souweidane’s work could have for future families in the fight.

“Dr. Souweidane has devoted his life to kids with DIPG,” said Jason Carr, co-founder of the ChadTough Defeat DIPG Foundation. “We believed in him when he treated Chad and knew that the incredible work he was doing then would create positive change for the future.”