I never met Lily LaRue Anderson, but I appreciate her silliness, humor, strength, and charisma left behind through videos and stories.

In one video, Lily’s mom, Barbara, introduces Lily and asks her how she is. The strained reply that she is “good” and her answer that what she wants is her “boo-boo gone” will rip your heart out, without a doubt, but the personality that follows will make your day if you let it.

When Lily is asked what else she wants, her first answer is a pig. Then she continues into a laundry list that is positively hysterical.

Another fantastic video featuring Lily was sent to mom, Barbara, from one of her doctors. Kids with Diffuse Intrinsic Pontine Glioma, or DIPG, are subject to regular physicals to assess the progress of the disease.

Well, Lily got creative with hers, “twerking” for her doctors and singing, “Let it burn” to the tune of, “Let it go” in the movie, Frozen.

“She said she had saved a video of Lily twerking for them and then she had everybody else doing it,” said Barbara of Lily’s ability to have fun through the pain. “That was her. She was just amazing through everything.”

As you probably guessed from her aforementioned wish list, Lily was also passionate about animals. During one of her treatments, the hospital staff informed her that they “had a surprise,” which included therapy guinea pigs for her to play with.

Lily, who had lost her ability to walk after her tumor was biopsied, regained that ability and went on to pull the guinea pigs around the hospital in a wagon.

“It was only because of those guinea pigs – it was crazy to me,” said Barbara. “What are the chances of having therapy guinea pigs? But that was her focus. She would have been an amazing animal activist. She was already born one.” 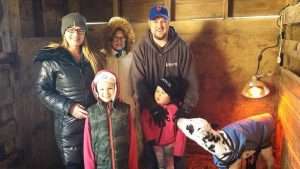 Just a few weeks before she passed away, Lily asked if she could milk a cow, so her family found the only dairy farm open in the area and took her to milk the cow in the middle of winter.

“We literally carried her in,” said Barbara. “Little did we know, New Jersey only has one dairy farm that’s open all the time, but friends of ours found it and let us come.” 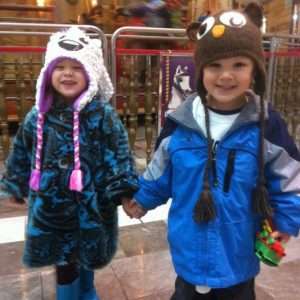 Lily passed away on April 6, 2015, so the Anderson family is still experiencing their year of firsts without her.

“We survived December,” said Barbara. “I didn’t that I would. I honestly didn’t think that I would, but we did.”

Barbara and her husband, Brian, and their three surviving children — one of whom is Lily’s twin brother — are making it through by “trying” every single day.

“That’s all we can do,” said Barbara. “Some days are better than others, of course.”

One way that Barbara and Brian have coped with grief is by reaching out to other parents reeling from the pain of losing a child.

“It has helped tremendously,” said Barbara. “My husband has spoken to so many other dads and other families that have not only dealt with DIPG, but maybe their children died from other cancers.

“With me, I just talk to families that I know and even if I say just one thing that stays with them, then it’s a gift. Maybe it’s just one little light in their dark, but there’s a lot of dark. If you laugh a little bit more than you cry, then it’s a good day.”

What has become the staple of Team Lily LaRue is the “Yelly voice.” When Barbara was explaining to Lily what was happening with her tumor, she phrased it using language Lily could understand.

So speaking in a “Yelly voice” in the name of DIPG research became the way to do things for Team Lily LaRue.

Use Your Yelly Voice

Barbara, Brian and their family hope that you will use your “Yelly voice” in the name of DIPG research. Spread the word to friends, family, and acquaintances that we need to find a cure for DIPG.

“Things have to change,” said Barbara. “I mean, if you think about it, Leukemia wasn’t curable 10 years ago. It was still a death sentence.

“Now it still in certain cases, but the survival rate is around 80-percent. Why? Because they focused on it. They focused on the biology and they found treatment options.

“We need to do the same for DIPG.”

You can use your “Yelly voice” to support Team Lily LaRue by visiting their site on PayPal.