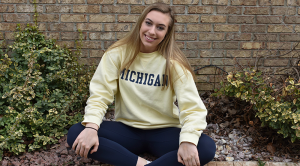 Sports have seen a double-digit decline over the past decade, largely due to tighter budgets in communities, but young people that participate in sports are found to be happier, healthier and better students. Gatorade Play It Forward empowers Gatorade Player of the Year recipients across the country to award local or national sports organizations with grants, so they can continue helping young athletes enjoy the benefit of sports.

“I chose to donate to the ChadTough Foundation, because of a young Michigan man,” said Mruzik. “As a future Wolverine, I wanted to give back to a community where I will be lucky enough to call home. I can only imagine what Chad and his family endured. However, I do know it was an inspiration to us all and the creation of the foundation to try and prevent other children from going through that was something I want to whole heartedly support. As a 5-year old, Chad forever changed the world and I can only hope to impact the world as much as he did.”

“It’s amazing to know that Chad inspired this young lady to want to give back and choose ChadTough,” said Tammi Carr, Co-Founder of The ChadTough Foundation. “She’s an incredible athlete and it’s going to be exciting to watch her play at Michigan in years to come.”

About Gatorade Player of the Year

Play It Forward is Gatorade’s cause marketing platform, which empowers every one of the Gatorade Player of the Year award winners to choose a local or national youth sport organization to receive a $1,000 grant from Gatorade. Gatorade State Players of the Year then have the opportunity to submit an essay explaining why the organization they chose is deserving of one of twelve Spotlight Grants, which awards $10,000 to the organization.