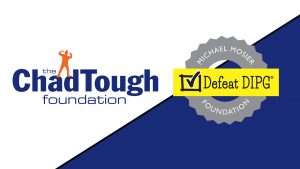 How We Fund Grants

Home » News » How We Fund Grants

When Chad Carr was diagnosed with DIPG in 2014, Tammi and Jason Carr were shocked to learn that only 4% of all federally funded cancer research dollars are allocated to ALL pediatric cancers combined. Like so many other families before them, they were horrified to learn that less than 1% of those funds are allocated to children’s brain tumor research. Brain tumor researchers were almost entirely dependent upon private foundations to do their jobs.

“As a parent of a child with DIPG, it’s hard to describe the bewilderment and anger you feel when you are told the standard of care for DIPG has not changed in over 40 years. When you combine a lack of tissue to study with a severe lack of funding for childhood cancer, especially brain cancer, you end up with no progress,” said Tammi.

Tammi and Jason, along with Chad’s grandfather, legendary former University of Michigan football coach Lloyd Carr, established The ChadTough Foundation with a mission to inspire and fund game-changing research to discover effective treatments for pediatric brain cancer, with an emphasis on the most complex form, Diffuse Intrinsic Pontine Glioma (DIPG). They were determined to change the outcome for future families who face a DIPG diagnosis. They would focus on funding collaborative efforts led by leading pediatric brain cancer researchers that showed the most promise for a cure.

Since its inception, The ChadTough Foundation has been committed to ensuring that as much money raised as possible goes directly to funding research. While the Better Business Bureau recommends nonprofits allocate at least 65% of funds to their programs, ChadTough last reported allocating 90% of the foundation’s total expenses for research funding.

Donating to research at Michigan Medicine on behalf of Chad began within days of his diagnosis. People were inspired to act as they heard the news of his terminal diagnosis. There wasn’t much the average person could do, so they wanted to at least give. So the Carrs set up the ChadTough Fund at Michigan Medicine. That fund eventually supported the research done on Chad’s postmortem 4.6-cm tumor, which unearthed a new discovery with big potential: a genetic mutation called PTEN drove the growth of his cancer. PTEN mutations play a role in some other adult cancers, but they’d never before been shown to drive growth in DIPG tumors.

Prior to Chad’s diagnosis, U-M researchers were not exclusively studying DIPG, although U-M researchers had been studying other pediatric brain cancers for years. By 2016, with growing support for both the ChadTough Fund at Michigan Medicine and the newly established ChadTough Foundation, the University of Michigan made the strategic decision to focus on becoming a leading pediatric brain tumor research center by establishing the U-M Pediatric Brain Tumor Research Initiative. After the Carr family helped to secure $30 million in funding, U-M officially named the initiative the Chad Carr Pediatric Brain Tumor Center. Today, The ChadTough Foundation is extremely proud to direct a portion of their funding to the incredible work being done at Michigan Medicine. When Chad was diagnosed, there were 2 researchers doing work on DIPG. Today, there are over 25! A cure is coming, and they are confident Michigan Medicine will be a part of finding it!

In addition to the work funded at Michigan Medicine, The ChadTough Foundation is honored to partner with the Michael Mosier Defeat DIPG Foundation to fund additional pediatric brain tumor research around the world. The founders of the two organizations, the Carrs and the Mosiers, crossed paths under the most unfortunate of circumstances. Their boys, Chad and Michael, were diagnosed with DIPG in the same month of 2014. Michael passed away 8 months later on May 17, 2015. Chad passed away later that year on November 23rd. Eventually, they realized they had the same mission: fund research to help find a cure as quickly as possible. Together, they are committed to building one of the most comprehensive grant programs for funding pediatric brain tumor research, with an emphasis on the most complex form, DIPG. Since they began working together in 2017, they have committed to funding almost $7M to help find a cure.

Both families knew they were not in a position to adequately determine how to make sure their funds were as impactful as possible. The ChadTough Foundation agreed to jointly fund projects with the Michael Mosier Defeat DIPG Foundation because they established an exceptional Scientific Advisory Council. Their Scientific Advisory Council is comprised of leading experts on childhood brain cancer. The Council reviews grant applications and makes recommendations to ensure resources are used to fund the most promising DIPG research projects.

“The joint funding for The ChadTough Foundation/Defeat DIPG grants is a powerful approach to extend the impact of two highly effective foundations,” said Dr. Suzanne Baker. “By working together, the combined efforts of the two foundations goes much farther.”

All of the grants are multi-year grants, allowing researchers to spend more of their time in the lab and less of their time seeking additional funding for future years. The Scientific Advisory Council recommended a funding structure to support three types of grants:

The result of the uniquely designed granting process “is that a broader range of new and innovative ideas can be pursued by outstanding scientists at different stages of their research careers,” explained Dr. Baker. “This level of support is also drawing more scientists to study this devastating childhood brain tumor.”

Collaboration amongst pediatric brain cancer researchers is something that is very important to both the Carr family and the Mosier family. Because research has been so limited over the last 50 years, researchers from all over the world know they have to work together on their findings.

“If only one institution studied it (pediatric brain tumors), you’d only have a few patients to glean information from, and you wouldn’t get a very complete picture of the biology of the disease or what treatments are going to work on the majority of DIPG patients. It’s so important to have many different institutions working together on this problem so we can combine our knowledge,” explained Fellowship award winner Dr. Zachary Reitman of Harvard University, Dana-Farber/Boston Children’s Cancer and Blood Disorders Center.

The newest funding collaboration for The ChadTough Foundation is with Alex’s Lemonade Stand Foundation (ALSF). ALSF is dedicated to changing children’s lives through impactful research, raising awareness and supporting families to help cure pediatric cancer. ALSF recently launched the Crazy 8 Initiative with the purpose of detailing roadmaps for cures for specific, hard-to-treat childhood cancers, including DIPG. They have an incredible scientific advisory council of their own that’s able to recommend the most promising projects to fund.

“The day is coming when we can celebrate the first survivor of DIPG,” said Tammi Carr.
The vision of The ChadTough Foundation remains clear – that DIPG is no longer a death sentence for the children of the future.

Change is happening, and it’s gaining momentum. We know this change has become possible only because private foundations like ours are funding DIPG research at a significantly increasing rate. This funding has attracted new researchers to the field of DIPG, and in many cases has served as seed money that’s led to bigger federal grants. In a matter of just five years, doctors have evolved from hopeless to hopeful, believing a cure for DIPG will be found in our lifetime.

The ChadTough Foundation remains committed to funding the most promising research on pediatric brain cancer around the world. They firmly believe that by studying the most deadly and complex form, DIPG, discoveries will be made along the way that will unlock cures for the rest.