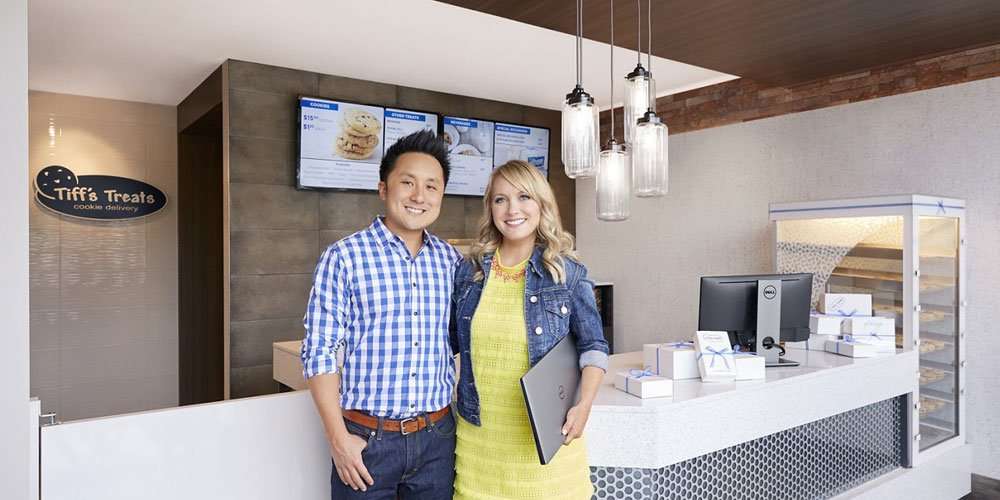 Home » News » Making a Difference, One Cookie at a Time Tiff’s Treats recently announced the ChadTough Defeat DIPG Foundation as its first corporate charity beneficiary. In honor of Connor Olympia, one of our Family Partners, the cookie company donated $10,000 to the foundation and will be announcing events throughout the year that will allow its customers to support the fight to end pediatric brain cancer.

“The fact that DIPG is so underfunded and has so little awareness makes us want to help in any way we can so that other families don’t have to suffer the same outcome,” said Tiffany Chen, co-founder and president of Tiff’s Treats. “We are honored to have the chance to make any impact at all on the future of this disease.”

HOW IT ALL STARTED

In 1999, Tiffany Taylor and Leon Chen were college sophomores at the University of Texas, just trying to get through their exams. One night, after inadvertently standing Leon up for a date, Tiffany brought him her special, hot-from-the-oven chocolate chip cookies to apologize. It only took one bite to gain Leon’s forgiveness before he talked Tiff into starting her own cookie business. The two began taking orders on a cell phone, baking cookies in the oven at Leon’s apartment, and Tiff’s Treats was born.

Today, Tiff and Leon are married, and their company has grown to 68 stores (with locations in Texas, Georgia, Tennessee, North Carolina, and Oklahoma) and 1,700 employees. While their mission to make amazing cookies delivered warm and fresh has stayed the same, the couple grew to realize they also wanted to give back to the communities that they serve.

“When we were 19-year-old college students just starting out, it never occurred to us then that we would be in a position to contribute to charitable causes,” said Tiff. “But as we received more and more requests from local organizations looking for donations, we realized the opportunity we had to make a small difference.”

When Tiff’s Treats opened its second location in Austin, the company hosted a grand opening event and donated all of the proceeds to a local charity. Tiff and Leon saw the impact they were able to make, and since then, sales from every one of their 68 store grand openings have benefitted a local charity. In April of 2016, just before Tiff and Leon opened their Woodlands, Texas, store, the couple learned of a local 4-year-old boy named Connor Olympia, who had recently passed away from a type of brain cancer called diffuse intrinsic pontine glioma (DIPG). Through a long-time team member, Zack Medlin, Tiff and Leon learned about the little boy’s battle and the work his parents, Peter and Alexis Olympia, were doing to raise awareness of the disease that robbed them of their child. Tiff and Leon knew right away they wanted to donate the proceeds of their Woodlands grand opening to support the work Connor’s parents were doing to fund research for a cure for DIPG.

The day of the grand opening, Tiff’s Treats had a huge turnout in support of the cause, selling more than 900 dozen cookies. There, Tiff and Leon met Peter and Alexis Olympia for the first time and instantly felt a connection. They learned that the Olympias had a baby boy, Ryan, born just six days after Connor’s passing. Ryan was the same age as Tiff and Leon’s own twins, making the idea of losing a child that much more palpable and close to home.

“Their loss was fresh, and yet still they came to the event with smiling faces, determined to raise awareness,” said Tiff. “We were, and still are, in awe of this family’s strength in the face of such unbelievable tragedy.” Now, on top of hundreds of thousands of cookies donated each year to nonprofit organizations, Tiff’s Treats has donated more than $200,000 to worthy causes. Still, the story of Connor Olympia has made a permanent impact in the hearts of Tiff and Leon. To date, they have donated more than $25,000 to DIPG research in honor of Connor.

The cookie company also announced that it will be hosting Tiffwich Block parties at the stores in conjunction with football game dates and all of the proceeds will benefit the ChadTough Defeat DIPG Foundation. In addition, Tiff’s Treats will be matching all donations up to $10,000. You can learn more about these events here.

Cookie lovers can also add a donation of any amount to orders between September 13-19, or select the Connor Man Pack which includes cookies, a Frost ‘ems frosting cup and a $5 donation.

“No words adequately express how incredibly grateful we are for this ongoing partnership,” said Alexis Olympia. “For the last five years, this amazing company has continued to support us every step of the way in our mission to honor Connor and find a cure for DIPG. Tiff and Leon have stood alongside us throughout this unimaginable journey, and it’s their unwavering love and support that keeps our family going.”