Mom, Tara, remembers: “Aidan loved to entertain to get everyone laughing.”

Aidan Dunion’s parents, Tara and Patrick, thought Aidan was being silly when he started asking for help walking down the hall or up the stairs. He said he was afraid of falling.

It didn’t take long for their parental instinct to kick in and they took Aidan to the doctor. A few visits and some persistence confirmed the worst: Aidan had Diffuse Intrinsic Pontine Glioma, or DIPG. He was almost four years old and had just started preschool. He loved the Flyers, soccer, Legos, playing zombie video games with his brother, Ryan, and reading books with his sister, Caitlin.

The diagnosis was a punch to the gut. 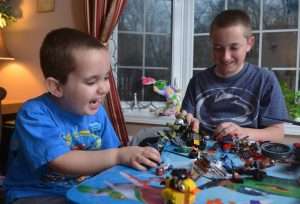 Tara and Patrick struggled with the stigma and confusion of DIPG just like so many other families. They had to navigate through their child’s treatment with little to no input from medical professionals, fighting to be heard every step of the way.

“You don’t know who to believe,” said Tara. “There’s one doctor telling you to take your child home and just enjoy them. Then you meet with another doctor who suggests radiation and experimental trials. We did a lot of research, but you are out there doing this on your own. We had to make these decisions that doctors can’t even make.”

At one point, Tara and Patrick were hit with the harsh reality that Aidan’s tumor had spread to other parts of his brain. When one doctor broke the news, she was surprised that they didn’t already know.

“I had to yell at someone, said Tara. “I said, ‘I do not want us to be placed in a corner and forgotten about because my kid has DIPG! No doctors came to see us and we were just trying to get some answers.

“What are we going to do? He’s not eating, he’s not talking, and he’s not doing anything. You have to throw a tantrum in order to get the doctor’s attention. Just because he has DIPG doesn’t mean you put us in the corner and let Aidan die. That’s exactly how we felt.” Aidan may have only lived four short years, but he touched so many during his time on earth.

“Aidan was a pleasant surprise, and he came at the right time in our lives when we needed him most,” said Tara. “I remember telling my husband, ‘I don’t know what it is about Aidan, but he warms my heart, he is so special.’”

Aidan just had something about him that made everyone around him feel special and loved. When others would meet him, they would gush to Tara and Patrick just what an amazing little boy he was.

“His smile would just make you feel like a million bucks,” said Tara. “It’s how he was all the time. You would walk into the room, and he would yell, ‘Mommy!’ and he would run to you with arms wide open. That’s how he greeted everybody. He was just an amazing little boy.”

It was that special quality of Aidan’s that drew a parallel for Tara between him and Chad Carr: their infectious smiles, blonde hair, and ability to touch the hearts of those around them.

“When I read about Chad he reminded me of Aidan,” said Tara. “The little blonde hair and he was always smiling and happy! It’s hard to watch another child going through it. There’s so many people who never even got to meet Aidan, but they heard his story and saw the pictures or videos and they fell in love with him, too.” While Aidan was still alive, Tara and Patrick talked to him about getting a puppy.

“Aidan was no longer able to speak at this point, but he was able to communicate with us that he wanted a big, white and brown dog,” recalled Tara. “I asked what he wanted to name him and Ibelieve he was trying to communicate Thor but we really couldn’t figure it out.”

Unfortunately, they never had the opportunity to get him the puppy, but — just four months after Aidan passed away — it seemed he found a way to get the puppy for them.

“We were at a fundraiser and there was a dog rescue there,” said Tara. “There were all these black Labrador pups and one white and brown puppy with long ears. I asked the lady if he was up for adoption. She said yeah and that his name was Buzz. I said, ‘Are you kidding me? Aidan loved Buzz Lightyear.’

“Then she told me he was the last one of his liter — all his brothers and sisters had been adopted and she couldn’t believe no one was adopting him. Well I knew why, ‘It’s because his name’s Buzz, no wonder. He’s meant for us!’”

Even though Buzz is a handful — he’s a treeing walker coonhound who chases squirrels — he has played a huge role in helping Aidan’s family cope with their loss.

“He makes us laugh and keeps me so busy with all his energy and wanting to go in and out of the house to chase squirrels up the tree,” said Tara. “I feel like Aidan’s saying, ‘See Mom, he can keep you busy now!’”

Just as so many other families have dedicated their lives to tackling DIPG, the Dunion family has as well. Aidan’s Avengers is a nonprofit with the same mission as The ChadTough Foundation: to raise awareness and money for DIPG.

“All these years federal dollars should have been equally distributed between adult and pediatric cancers, it could have made a difference,” said Tara.

“We should all be mad that only a small percentage of federal research funding goes to pediatric cancer research.  It has taken the parents and our organizations to finally start to see a change.  It shouldn’t be our responsibility, but we need to do something for change!”

Regardless of where responsibility should go, the Dunions and other DIPG parents are pressing forward because they care too much about those who have been impacted by DIPG and those who have yet to be impacted.

“There is a plan, God has a plan for us,” said Tara. “I think this is it. We have to find a cure or better treatment or something for these kids. We just have to.”