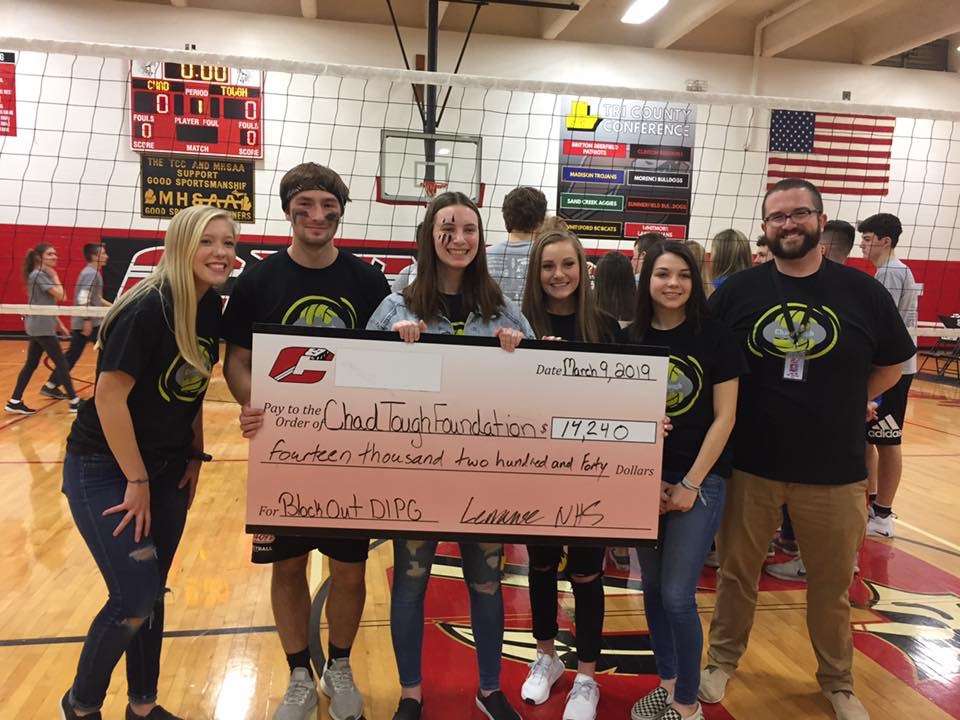 By Lindsey SiehdaJanuary 16, 2020No Comments

Tyler George is the AP Social Studies teacher and National Honor Society advisor at Clinton High School in Michigan. In 2015, he heard about Chad Carr and his battle with pediatric brain cancer. The story hit him hard, and he wanted to find a way to do something to help. “Having two boys of my own, I cannot fathom the pain that the Carr family went through,” said Tyler.

Driving home from the grocery store with his family one afternoon, Tyler thought about how the power of community support might be able to offer the Carr family some help. Having been involved in a volleyball tournament the year before with Clinton High School, Tyler had the idea of turning the event into an annual fundraiser for The ChadTough Foundation. He pitched it to the school’s National Honor Society chapter to sponsor the event. They agreed and Block Out DIPG was born!

Over the last four years, around 2000 kids have gotten involved in Block Out DIPG. “These kids now know the story of Chad Carr and what it means to be a ChadTough Champion,” said Tyler. The primary kids who moved the event forward over the years are Clinton High School students Mary Anna Burnham, Liam Tapp, Katelyn Zeller (formerly Clegg), Saydie Starnes, and Chloe Pike.

“The other day an alumni from Clinton High School sent me an email. While wearing his Block Out DIPG shirt at work, an adult recognized the ChadTough logo and thanked him for being a Champion,” said Tyler. “That is something that impacted him so much he decided to email me. Giving these kids the opportunity to do something and meet the family they are fighting for really lets everything fit into perspective.”

The impact Tyler George and the students behind Block Out DIPG have made is impressive. To date, the event has raised over $43,000 for The ChadTough Foundation. And they’ve even inspired another high school to initiate a similar event in 2020, expanding their impact even further! The Carrs could not be more grateful. “One of our favorite things to witness is students deciding to make an impact in their community. We talk about, ‘What can one person do?’ Well, Tyler George and his students have definitely changed the future of DIPG with what they have done!”