Five-year-old Raegan Elizabeth Mize (#rallyforraegan) was diagnosed with DIPG on May 11, 2019. Raegan endured and fought through what no child or adult should ever have to over the following 18 months, and gained her angel wings at the age of 7 on November 8, 2020. Raegan was a warrior and lived up to every aspect of the word. She was so brave and courageous, and her fight has been recorded in medical journals, news articles, and multimedia worldwide. Raegan’s treatment plan included two separate rounds of radiation (42 sessions total), as well as multiple chemotherapy and immunotherapy experimental trials — one of which she opened up as patient number one, paving the way for future patients, and which is still open and enrolling as of this writing. Raegan also endured two brain surgeries: a biopsy that confirmed her H3K27 mutation, and a shunt placement toward the end of her fight. Raegan’s remaining samples of tumor tissue from her biopsy were also donated to the hospital for research.

Raegan had the most genuine and beautiful soul. Her fight was the most horrific and amazing thing that Andrea (mom) and I (dad) have ever witnessed; she was so much more than just social media pictures and videos. Anyone who had the opportunity to meet Raegan can attest to that. Raegan didn’t put on a show for the camera — what you saw on-camera is exactly what you saw off-camera. She was just so full of life, so full of smiles and laughs, and made the world such a better place in the short time she was here. She undoubtedly changed the world one giggle at a time. We have vowed to continue her fight until a cure is found, and Raegan’s ever-growing army stands with us every step of the way… DIPG you will be defeated. 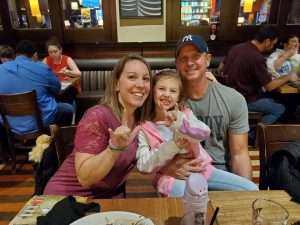 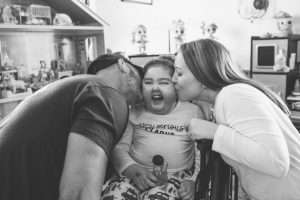