Little Jack Demeter and his family didn’t know what hit them. This little sweetheart had just turned three when he started experiencing strange symptoms that resulted in mom, Janet, taking him to the hospital.

The doctors ran a series of tests looking for signs of seizure or stroke, but it was the MRI that would reveal the horrible news.

“It was a two-hour process,” recalls Janet. “They called me when he was halfway through. The doctor team that I had … all their eyes were misting.

“‘You’re going to have a whole new team now,’ they said, ‘we just wanted to be the first to tell you. We can’t tell you exactly what it is, but they found a mass.’

For Janet Demeter, Jack’s diagnosis was the horrible rug pulled out from under her when she finally thought things were going her way. A woman who struggled with suicidal depression and an eating disorder early in life, she had finally found peace after having daughter, Sophie, in 2005, and then Jack in 2008. 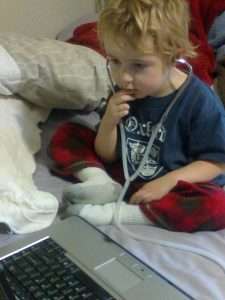 “I was happy. People would meet me and they would think I was a fairly well-adjusted person,” she said wryly.

Then came the diagnosis that hit her like a brick wall after she dared to feel safe in her happiness.

“It was one of the darkest experiences of my life,” said said. “What was really awful about it was it was very isolating. You were made to feel as if you were suddenly on another planet and what was happening to you was so rare.”

DIPG is still rare, but in 2011, awareness was practically nonexistent. If parents today feel lost when their children are diagnosed, Janet and her family must have felt as though they had been removed from all life as they knew it.

“I was absolutely unaware that at our hospital at that time, there had been six (children with DIPG) that year and nobody let me know,” she said. “I felt completely isolated and then it’s really hard to talk to other parents.”

No Chance At All

“We did everything natural for him that we could because he was so frail and the choices they gave us for chemotherapies were so horrific,” said Janet. “We know it’s not going to effect whether he lives or dies so, no, I’m not going to make him sick for the little time he has left.”

As have many DIPG parents, Janet was willing to listen to anyone who had a natural remedy for her son.

“We would take from every angle,” she said. “I truly believe that when you’re looking at something like this, it makes theories that are far fetched in the general population’s minds look promising, because obviously nothing in our little box has figured this out.

“One thing that was frustrating was knowing that there were many nontoxic therapies available that just simply hadn’t been developed because that’s not the route that our system takes.”

One of the most beautiful things about Janet is her ability to paint the picture of her incredible son, something no writer can do any better than she. 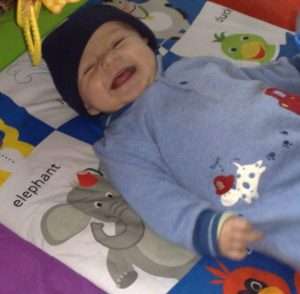 “Throughout all of it, the most important thing is just that he was here and he was an amazing little boy. He lit up a room,” she said. “After having radiation, his symptoms had subsided a bit and he got to go to preschool and he was so happy. He loved going to school, he loved learning, he knew the alphabet in different languages. He was designing his own fonts.

“He was artistic and he was brilliant. He was just a little guy. He wrote better than my daughter. But he’d get there at school and he’d say, ‘I’m here!’ And all the gals would just love him.

“He’d get on the bus and he’s say, ‘You’re ‘P’ for Patty and you’re ‘M’ for Micheal and ‘P’ for Paul!’ He was so excited to be alive and to live and it was torturous to watch the tumor just slowly snuff him out.

“When I woke up on the morning on the day of his funeral – we did a cremation ceremony – I had ‘What A Wonderful World’ blasting in my head. I knew it was him because the first time I ever heard that song was when I was in a treatment program years ago in a hospital. I was so unhappy. I didn’t want to live, I didn’t feel worth my oxygen, nothing could help me. That was just the state I was in.

He was telling her that’s how it was.

Progressing Despite the Pain

Janet has channeled Jack’s incredible energy into the Jack’s Angel’s Foundation, which is dedicated to raising awareness for DIPG in her immediate area in California.

She hasn’t made enough money to donate to the collaborative, but she would like to someday. For now, she is focused on raising a fund for graduate students because she wants those called to find a cure to get the funds they need so they can help find it.

What is perhaps the most touching thing about Janet is that she started the foundation by herself and continues it because she cares so much about saving others from the horror she and her family have endured.

She is in awe of the Carr family with its huge support system, thankful they are taking this step to bring awareness to this monster of a disease that took her son. It’s why the resolution she has on the table is named Chad and Jack’s DIPG Resolution.

“I felt like I was just guided,” she said. “I almost didn’t go to Washington this last summer, and if we hadn’t, the resolution wouldn’t be on the table.

“It’s not like I did it, but I was part of it. If you feel called to a cause or something’s really important that you know needs to change and there’s a lot of others that feel that way – that’s your calling to do something about it.

“So I know that not everyone is called to DIPG and childhood cancer, and not everybody’s called to every cause. But those of us who are, if we stand up together, we can make the change happen.”