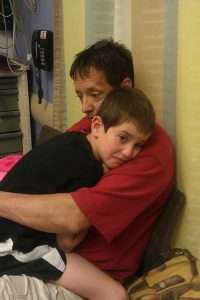 David and Joey at the hospital on the day of diagnosis.

The Fabus family was no stranger to loss when eight-year-old Joey was diagnosed with Diffuse Intrinsic Pontine Glioma, or DIPG, on May 15, 2014. Cindy and David had already lost one child, 15-month-old Hannah, to Polycystic Kidney disease in 1997.

Experience in devastation does nothing to soften repeated blows, however. It was one of the worst days in Cindy and David’s lives, one Cindy says she re-lives over and over.

“It was just so gut-wrenching and my ears were just ringing and the room was spinning and I’m trying to take this all in when the physician called,” she recalls. “I couldn’t even begin to fathom what he was saying, so we got in the car and left to go to Children’s Hospital in Pittsburgh and I started looking up what DIPG stood for.

“I got through the first paragraph and basically turned off the site and said, ‘Forget it.’ I knew they were going to tell us he was dying.”

Cindy and David knew that, but they didn’t want Joey to know. 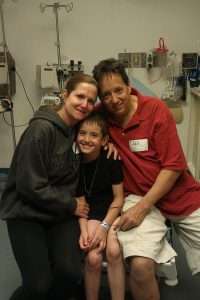 Cindy, David, and Joey Fabus at the hospital the day of diagnosis.

“We wanted him to be as happy as he possibly could be throughout the rest of his life,” she said. “We didn’t want him to know from the beginning that he was definitely going to die – that this was a death sentence – because we can’t imagine the struggles that would have been going on in his mind.

“We never told him, ‘No, no, no, you’re not going to die,’ or ‘We’re going to get you better.’ We would always just tell him that we hoped it didn’t happen. That was the best we could do without breaking his heart.”

The burden these parents kept for their son had to have been excruciating. To see hope in his eyes when they knew there was no hope to be had. But there isn’t a manual to read to guide a parent in how to deal with this sort of thing.

“He would just say things to us that were just so heartbreaking like, ‘When I’m able to walk again, we can go outside and do this and we can do that,'” Cindy recalls. “It just rips your heart out when they say that to you and you just know it’s never going to happen.”

Cindy and David made the decision other DIPG parents have also made: they allowed Joey to enjoy as much of the rest of his life as he could without putting the weight of death on his shoulders.

“I think, for him and our family, him not being told right from the get-go that he was dying was the best decision that we could have made for him,” said Cindy.

To remove the DIPG diagnosis and just see Joey is to see one of the nicest, happiest, kindest kids anybody had ever met. He was upbeat, enjoying simple things like helping his dad around the house. 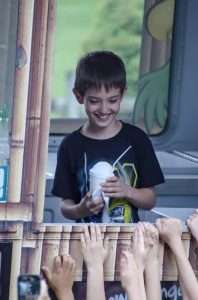 Joey at an end-of-the-year party for his 2nd grade class.

“My husband will be working on something — he’ll be cutting the grass, or he’ll be working in the garden — and he’ll be like, ‘You know what? If Joey was still here, he’d be right here with me,'” said Cindy. “And that was the truth. You could take that kid out and be putting up a wall and he would be right there with you doing whatever little part of it that he could.

“He was the only one of all my children who could sit for hours and go fishing with his uncles and with his father. He was a special little boy and he touched a lot of lives.”

When September rolled around, Joey continued to go to school to maintain a sense of normalcy in his life. Cindy and David were welcomed into the class right along with him, growing close with Joey’s classmates.

“His elementary school was phenomenal in terms of support for him and us as a family,” said Cindy. “We got to school with him anytime we wanted to, there were no questions asked. We were like part of the classroom. They loved it when we were there.

“It’s unfortunate that really good things happen to people sometimes because of very unfortunate situations, but I’m very grateful for all of them.” 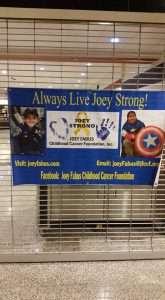 On January 21, the Fabus family mourned the one year they had spent without Joey. It was a day filled with heartbreaking memories of the moments that led up to his death, which was expected, yet unexpected.

Joey had made it through the holidays when Cindy and David noticed subtle changes that began to pile up. They knew the end was coming, but wanted confirmation from the hospital. They took Joey in for an MRI.

“We got his results and our family came in to see him that night and overnight,” said Cindy. “By the time we reached morning, he was no longer verbally responding to us.

“We had only spent the night because we were going to discuss hospice at home and we ended up never leaving the hospital. He survived until 4:56 exactly that afternoon.”

Joey was one month shy of his ninth birthday.

Cindy and David knew there was no way they could sit and watch time go by as they grieved their son, so they started a foundation in Joey’s name.

“There’s no way he was going to die in vain,” said Cindy. “So we set out to do what we could.”

Cindy and David have gone out of their way to reach out to families impacted by DIPG to give money to help pay bills or provide gifts for kids — anything to make lives easier. They are also looking forward to donating to DIPG researchers like Dr. Michelle Monje, who received Joey’s tumor.

“This disease gets such little funding that these physicians and researchers are all counting on us to help them because, certainly, the government isn’t pulling their weight,” said Cindy.

“That’s why our biggest goal is awareness. We sell t-shirts at events and sometimes we just start giving some of them away because we just want people to know and understand the impact that this disease has and what it means to these families. It’s just awful. You can’t put it into words.”