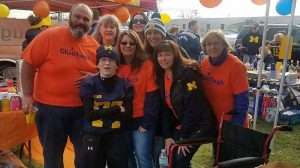 THE POWER OF ONE: DENISE DEAN

Home » News » THE POWER OF ONE: DENISE DEAN

“The volunteers at ChadTough are incredible. It’s terrible how I met them, but I am so grateful to know them,” says Denise Dean, a physical therapist, mom of five, and long-term volunteer for ChadTough.

Dean got involved with ChadTough right at its tragic inception. She grew up in Saline, Michigan, where the Carrs live, and one of her friends from high school posted on Facebook that a friend’s son, Chad Carr, had been diagnosed with brain cancer and needed prayers.

This Facebook post wasn’t the first time Dean was made aware of the tragic nature of brain cancer in children. “I was familiar with DIPG by the time I saw the Facebook post,” she says. “I had followed another charity, the Jessie Rees Foundation, for a while at that point. Jessie also fought DIPG and died when she was 12 years old. During her illness, she and her family started an organization to send ‘Joy Jars’ to spread happiness to other kids fighting cancer.”

When Chad’s story crossed her path, she immediately knew she wanted to help. The DIPG stories, the lack of treatment options, and the zero percent survival rate were almost too horrible to believe. During a time of seemingly constant advancements in medicine, it did not seem possible that there was a type of cancer taking children’s lives with no treatment available to stop it. Parents and children need to be able to hold on to hope, Dean thought. “As I read about DIPG, I came across some of the statistics. The research, funding, and medical advancement was abysmally low. Neil Armstrong’s daughter had DIPG over 50 years ago, and the exact same treatments that were available to her—radiation and ‘make memories’—were still prescribed for kids fighting DIPG when Chad got sick,” Dean remarks.

From the moment the ChadTough Facebook page was created by Tammi, Dean followed along. “Tammi was so open throughout the diagnosis. You felt like you were walking right next to them, and I remember thinking, ‘how could I not help?’” Dean says. “Chad was just a little boy wanting to be a little boy. It was heartbreaking. It made me think about my own kids, and I just felt a connection.”

Her first chance to get involved was as a ChadTough volunteer at that year’s Big House 5K. After that, any time an opportunity presented itself to help, Dean signed up. She signed up to help with merchandise sales at flag football events, worked at the ChadTough garage sale, and even was a member of the first Chicago Marathon team in 2017, raising over $3,000.

ChadTough events, including RunTough, would not “run” smoothly without the help of Dean and numerous other long-term volunteers. “It is like a family reunion when we get to see each other at another ChadTough event,” she says. ChadTough is powered by its volunteers. Dean is also heavily involved with the annual ChadTough Champions for Change Gala. “It’s such an amazing cause, many people support and believe in the mission and are happy to volunteer year after year.”

At the most recent gala last May, Dean was stunned by the advances medical professionals have made with funding from ChadTough. “The leaps they’ve been able to make in the past few years since the foundation took hold are amazing. The research and funding, the collaboration, the experimental treatments, could all have a butterfly effect. Brain cancer should be tackled, and ChadTough continues to tackle it. The fact that researchers and families affected by DIPG have the strength to stare at it in the face every day, just continues to motivate me to do whatever I can to help.”