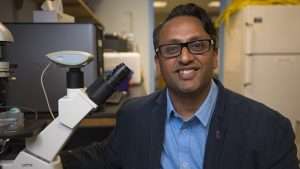 The hope of finding a cure for DIPG continues to grow as Dr. Sriram Venneti of Michigan Medicine has received a grant from the National Institutes of Health. The project grant is titled: Unraveling metabolic dependencies in H3K27M mutant Diffuse Intrinsic Pontine Gliomas.

Dr. Venneti is a physician-scientist whose lab works on understanding the biology of DIPG in order to develop a cure. Born in India, Dr. Venneti trained at the University of Pittsburgh, University of Pennsylvania and Memorial Sloan Kettering Center. While at Sloan Kettering, Venneti discovered a critical clue that is helping researchers understand the pathology of DIPG tumors.

In 2014, Dr. Venneti moved to Ann Arbor, Michigan to start his research lab on childhood brain tumors. Now, Venneti’s goal is to develop a drug that will kill DIPG cancer cells.

Venneti’s grant explores how DIPG cells need specific nutrients for their survival. “We find that certain types of DIPG cells with specific histone mutations are addicted to certain nutrients to enable them to grow and proliferate in an uncontrolled manner,” he explained. “In initial studies, we note that DIPG cells require glutamine for their growth. We are going to explore addiction of DIPG cancer cells to the amino acid glutamine, and plan on developing therapies to interrupt this addiction, to kill DIPG cells.”

The success rate of applicants trying for grant money from NIH hovers around just 19%. That means out of 51,000 applicants, only 9,690 would be awarded funding, making this an incredibly competitive grant.

Because only 4% of all federally funded cancer research dollars are allocated to all pediatric cancers combined, researchers are dependent on seed money from private foundations like The ChadTough Foundation.

“Receiving this grant would not have been possible without the early support from The ChadTough Foundation that enabled us the ability to gather the data necessary to strengthen our grant application,” said Venneti. (In 2018, Venneti was one of the first researchers at the Chad Carr Pediatric Brain Tumor Center to receive a Principal Investigator grant from The ChadTough Foundation.)

Earlier this year, husband and wife duo Dr. Maria Castro and Dr. Pedro Lowenstein, both of Michigan Medicine, received the first ever DIPG-specific NIH grant. With this money, they will implement an innovative gene therapy on mice in an attempt to find a treatment for DIPG. The therapy stimulates a patient’s own immune system to kill brain tumor cells. Castro and Lowenstein credit The ChadTough Foundation for the initial seed money needed to collect critical data important for grant consideration.

Awareness is a huge factor in the success of obtaining research dollars that will lead to finding a cure for DIPG. “Awareness has turned this around 180 degrees,” said Dr. Mark Souweidane, who helped treat Chad Carr during his 14-month battle with DIPG. “There’s been a ground swell from patient advocacy groups—that’s driven a lot of this. The tide has shifted, there’s no question about it.”

To date, The ChadTough Foundation has raised more than $9 million to support pediatric brain cancer research, with an emphasis on DIPG. Granting seed money to researchers in their battle to find a treatment—and ultimately a cure for this deadly disease—has been a huge step forward. After decades of zero progress, discoveries are finally being made. These discoveries are helping doctors learn ways to better treat patients and also offer DIPG families the hope that wasn’t available to the Carr family.