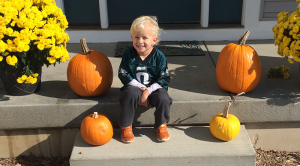 West Michigan Sprinkler Business Has Raised More Than $10,000 for DIPG

Drew Langstraat lives in the kind of neighborhood where people tend to help people, even if they are nothing more than casual acquaintances.

So when neighbors with Tom and Amanda Ruddy found out their 5-year-old son, Tommy, had Diffuse Intrinsic Pontine Glioma (DIPG) in 2016, Langstraat wanted to help. His resolve strengthened after Tommy passed away just 11 weeks later.

He wanted to get involved even though he didn’t know much about the Ruddys — or about DIPG.

As the father of eight children, Langstraat can’t imagine what his neighbors have gone through since losing Tommy. But one thing he has noticed in the time he and the Ruddys have lived in the same caring neighborhood in Hudsonville, Mich., is the smile that never seems to leave Amanda Ruddy’s face.

Langstraat has run a landscaping side business for more than a decade, first in Washington State and for the past seven years since he has moved to West Michigan. Part of his duties with his Grow Source, LLC company includes doing irrigation blowouts and doing them at a cost much lower than bigger companies that offer the same services.

Since getting to know the Ruddys, Langstraat has donated half of his profits from those irrigation blowouts over the past three years to DIPG research. Each year, without much advertising, Langstraat has seen the amount he has donated to the cause grow from $1,900 the first year to $3,500 in the second to about $5,000 in 2018.

Drew Langstraat and his son, Trigg. “It just keeps getting better and better,” Langstraat said.

The first two years, Langstraat completed all of the jobs with just one vehicle. But when Amanda Ruddy included Grow Source’s generosity on the Team Tommy Facebook page last year, Langstraat said he needed to step up his game, which meant investing in a second machine and taking on an employee to help him keep up with the work. The side business meant working around the schedules of others, which meant devoting more and more of his time on a daily basis to helping out those around him.

To Langstraat – who plans to open a Culver’s restaurant this year as his family’s main source of income – did so willingly.

“It’s a great cause because it could happen to anyone’s kid,” Langstraat said. “For me – it’s not about the money. It’s just to help out neighbors and for a cause that’s actually a really good cause.”

In the time he has joined Team Tommy, Langstraat has gradually learned more about DIPG, mostly from what Amanda has posted on social media. And although he realizes progress in finding a cure for such a devastating disease can be slow, he wants to continue to help raise money, having become familiar with DIPG and with a family that has dealt with it first-hand.

“I give the Ruddy’s so much credit because I’m sure they’ve been in that spot where they want to crawl under a rock and just be closed in,” Langstraat said. “But every time I talk to (Amanda), she’s got a smile on her face and you can tell it’s not easy and never will be.”

But like the Ruddys, Langstraat believes that good things can happen if enough people do their part to fight a disease that brings between 300-350 new diagnosis each year to children typically between the ages of 5-7 and that — to date — only has a 10 percent of patients survive two years after being diagnosed.

Still, each year more people like Langstraat choose to get involved.

“I feel like there is a cure out there and I feel like why not? If you can donate money that goes to help fund research, why not? You see how many kids are affected by it and the numbers are pretty intense.”