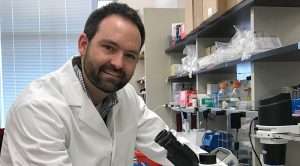 The ChadTough Foundation and Michael Mosier Defeat DIPG Foundation have partnered to fund more than $3.3 million in Diffuse Intrinsic Pontine Glioma (DIPG) grants. Their first round of grants were announced in 2017 and included a fellowship awarded to Zach Reitman, MD, PhD (Harvard University, Dana-Farber/Boston Children’s Cancer and Blood Disorders Center).

Reitman spoke with Defeat DIPG ChadTough team to provide an update on his project, “Prioritizing PPM1D mutations as a target for new DIPG therapies,” for foundation supporters:

The ChadTough Foundation and Michael Mosier Defeat DIPG Foundation are excited to have Zach Reitman engaged in this research project, uncovering important data for DIPG research. Both foundations look forward to what he will do in the field in the future.

Zach Reitman with members of his lab, Adam Boynton and Prasidda Khadka.